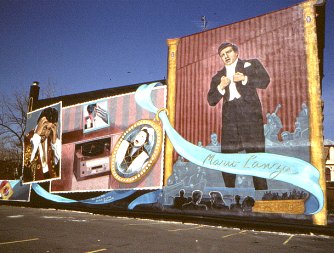 Commissioned by the Lanza Institute in 1997 with funds from generous supporters, the Mario Lanza Mural is a towering monument to a legendary star. It is located in the Lanza’s hometown of Philadelphia at the corner of Broad and Reed streets and on the sides of two adjoining buildings. A four-story building measuring 45 feet high and 30 feet wide connected to a three-story building attached to an 8-foot high by 70-foot wide low wall.

Artist Diane Keller created the work with Joe DiBella and Kathryn Pannepacker assisting. Some members from the Mural Arts Program also assisted near the end of the project. Ms. Keller immersed herself in the life of Mario Lanza with the help of Institute president Mary Papola and her staff. She listened to recordings and viewed countless photographs. Once the Institute approved a proof drawing, the difficult work of converting a concept into an artistic reality was begun. It took two months to draw and paint in the mural and luckily the weather was cooperative. This unfortunately was not the case on the day of the unveiling when the sky opened up and the rain poured down on the dignitaries and the large crowd of fans that assembled.

As you can see from the photograph the mural depicts several special moments in Lanza’s life. We see the marker commemorating the landmark status of his birthplace, a series of character shots from his films, the cover of one of his albums, his “Walk of Fame” star, and a phonograph and record. The entire mural is “tied” together by a flowing ribbon, which on the low wall features the names of people who contributed $500.00 or more to the mural fund. By the way that’s a car in the lower left hand corner of the photo, which was left in to show perspective.

While the photograph above gives you an idea of the way the mural looks, it must be seen in person to fully take in its immense size and beautiful majestic splendor.