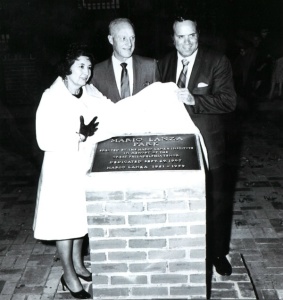 Located in the middle of a Philadelphia block on Queen Street between Second and Third Streets, the Mario Lanza Park is but another tribute to that city’s beloved son. It is a short walk from Lanza’s birthplace, St Mary Magdalen de Pazzi, and the Mario Lanza Museum.

The park was originally known as “Queen Street Park” but at the behest of the Lanza family and most notably Hilda Lanza, the city fathers renamed it “Mario Lanza Park.” It was dedicated on September 29, 1967 in a ceremony attended by Lanza family members including Mario’s mother Maria Cocozza as well as the President of the Mario Lanza Institute Nicholas Petrella and a representative of the Mayor’s office. 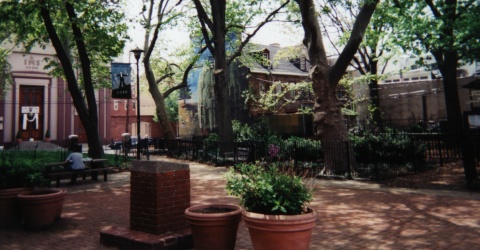 The park in recent years.

The park is very picturesque and serene and is the perfect setting to relax on one of the benches and read a book, have lunch, or listen to your favorite Mario Lanza recordings. There are four banners equally spaced around the park each bearing the name of the park and a facsimile of Lanza in a tuxedo singing. There is also a bulletin board for announcements. The park is populated with a variety of trees and bushes and there is a special enclosed section for citizens to let their dogs get some exercise. It should be noted that the Mario Lanza Park is a city park and is not owned, operated, or maintained by the Mario Lanza Institute.